What Are The World's Most Romantic Animals?

Susan Hayes answered
According to Webster’s Dictionary romance is the art of trying “to influence or curry favor, especially by lavishing personal attention, gifts, or flattery.” According to most women, it’s a lost art normally only practiced by men on Valentine’s Day and usually involves a box of chocolates and flowers bought at extortionist prices at the very last minute. 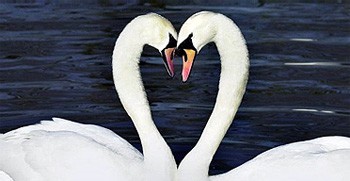 In the animal kingdom wooing a mate is serious business, and only the ones who know the score are going to get the chance to pass on their genes. Here are some of the most romantic animals around. 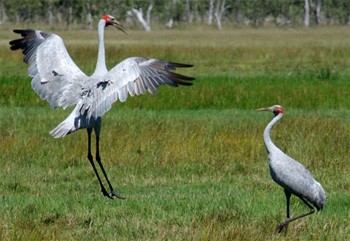 These grey cranes from “Down Under” mate for life, raising brood after brood of babies with their chosen mate, often in the same place.  Their similarities to a 1950’s sitcom family are not what put them on this list though; it’s because even the old married couples still know how to boogie.  Brolga are considered to have the most elaborate mating dance in the world and they do it every year, no matter how long they’ve been together.

The birds jump and gyrate, their wings outstretched. They hop, bow, call and bob their head in rapid movements, getting a serious groove on while trying to enhance the romance. They’ll often toss grass up in the air and catch it in their bills as a way to add to their displays.  One bird may dance alone, or a pair may dance together. Occasionally a whole group gets together, lines up and does the avian version of the Thriller zombie dance. 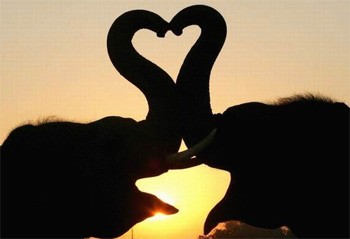 Their famous memories already give elephants the advantage over humans, in that they almost never forget a birthday or anniversary. These massive mammals usually live separate lives, but when it comes time to woo, the boys know what they’re doing.

Bull elephants fight for the right to mate, displaying their prowess and strength. Once the battle is done though, these mighty warriors turn tender, wooing their newly won mates with tender trunk twinings and nuzzles. After mating, the two will often stay together in a “honeymoon” period for several weeks. During this time they act like any love struck couple, nauseating their friends and ignoring the world in favour of each other’s company. 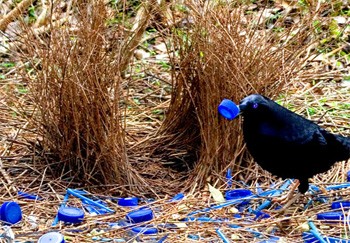 For his sake I hope blue is in vogue this year.You don’t have to be the toughest or the biggest to win the ladies,  at least not if you’re a Bowerbird. These feathered fellows are masters of interior decorating, and the ones with the swankiest bachelor pad get the most avian action.

The birds build a bower with two walls of vertically placed sticks, and then decorate the whole thing with brightly coloured objects. The types and colours of object vary from species to species, but usually include shells, leaves, flowers, feathers, stones and even discarded trash such as glass, coins and rifle shells.  The girls wander from bower to bower, checking out the male’s as they preen and dance and show off their collections, parts of which will have likely been stolen from other male’s bowers in a classic game of one-upmanship. The males with the best décor get the most attention, and usually end up with the lion’s share of the ladies. 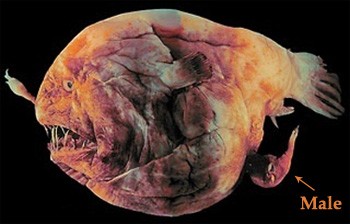 Everyone wants a mate that will stick by them forever, staying by their side through the darkest of times. The male Angler fish is the most devoted of mates, never straying nor cheating, forever bound to their chosen lady.

In the total darkness that is the ocean floor, finding a mate at the right moment is a nearly impossible challenge. Instead, mature Angler fish males have developed a different approach. When they are mature, their digestive systems begin to pack it in, forcing them to find a female to bond to. Once he finds one, he gives her a very special love bite, releasing an enzyme that dissolved his mouth and her body and fusing them together, truly making them two hearts beating as one, as they will share a bloodstream for the rest of their lives. When the time comes for her to spawn, she will already have a mate ready and waiting to father her future brood. 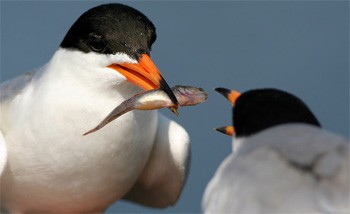 "With this fish, I thee wed."Giving gifts is a time honored romantic tradition.  Call it bribery, generosity or demonstrating the ability to provide for your mate, it all boils down to winning your chosen one over with well chosen tokens of your affection. Giving courtship gifts is not limited to humans however, though I don’t know of many girls who could appreciate the Tern’s idea of a dazzling present.

Terns are seabirds who know a thing or to about bling, as the females judge their potential mates on the size and number of fish they are presented with. The ladies reward the biggest and most lavish gift givers  by flying off to join them in an acrobatic flight overland to celebrate their union before they go off to pick a nesting site together. 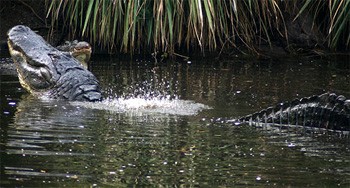 Good, good, good vibrations.Yes, alligators. Sure they’re ugly as sin and have a disturbing tendency to eat the cute and fuzzy mammals we all root for on the Discovery Channel, but to another alligator, these guys have the right stuff.

Bull gators will approach the female and begin showing off his best moves, including rubbing her back, blowing bubbles gently against her cheeks and swimming in circles around her, making her the centre of his attentions.  Along with these tender moments, he will bellow, roar, and use subsonic noise to create an aquatic display that is unique in the animal kingdom. They make the water around them dance like the Bellagio fountains in Las Vegas, putting on a show worthy of Headliner status, all in the name of love. 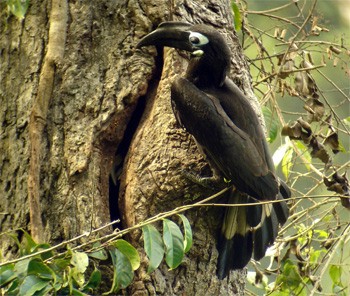 Okay, this is a bushy crested hornbill, but you get the idea.Putting a lady on a pedestal and doing her every bidding is a romantic notion straight out of a fairytale, along with princesses in towers and dashing knights in shining armour.
The White-Crested Hornbill has taken a page from those stories though, and stashes his lady love like a princess in a tower,  keeping her safe and nurtured during the time she is clutching their eggs.

When the pair has consummated their bond and she has laid her eggs, the male Hornbill goes about carefully sealing her and their future brood into the cozy hole she has chosen to nest in. Mud and excreta are piled up until there is only a tiny slit left through which she can be lovingly fed by her devoted mate.

For the next few weeks he will be her lifeline, keeping her safe and nurtured until the eggs hatch and the mother breaks out to help in the feeding of their new family.

I had the Athlon Optics Midas ED 8x42 to watch animals in wildlife a couple of years ago till I broke it during my hiking tour to the Rocky Mountains. It was my wife's gift to me on our anniversary, and I miss it greatly. Just want to compare these two with Nikon to decide which one to buy. Any experience with at least one of them?
World Land Trust report (2018) featured the most beautiful animal male dances and animal behavior in one of the essays at https://writemyessaytoday.net/write-my-essay-in-6-hours written by Gerald Shneider in his research paper Animal Behavior.