What Are The Greatest Bacon-Related Things People Have Created?

Luis Prada answered
Bacon. It is the food of the Gods. It may have taken sometime, but the internet finally caught on to this wondrous pig product. This once very basic breakfast food has now achieved the legendary status it so rightfully deserves.

Of all the things in our modern world that get unnecessarily hyped to the point of inevitable let down, bacon stands tall as perhaps the only thing that will always satisfy, if not completely surpass your expectations for how good it is. The faceless peoples of the internet recognized this and have honored bacon in the only way they know how: Making it even better through the showcasing of ridiculous bacon-related products and truly epic uses for this porky treat. 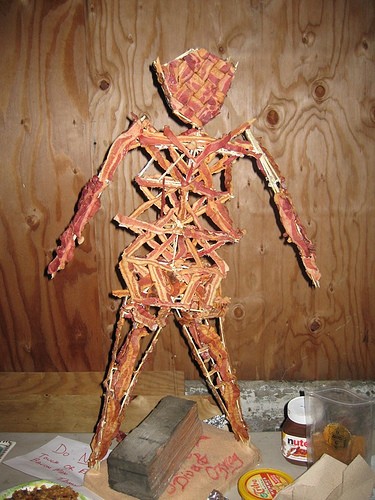 This three foot tall bacon effigy was created by a girl named Amy that also goes by the flickr screen name of NetDiva. Over the course of 10 hours, Amy, and her fiancé Steve, meticulously combined 80 bamboo sticks, 8 pounds of bacon, and 60 glue sticks. The result was a human shaped hunk of bacon that was later burned alive (perhaps as a sacrifice to the bacon gods) at Baconfest 2008, a San Francisco potluck-style party where attendees contribute bacon-related dishes.
http://bacontoday.com/baconfest-2008-featuring-bacon-man/ www.flickr.com 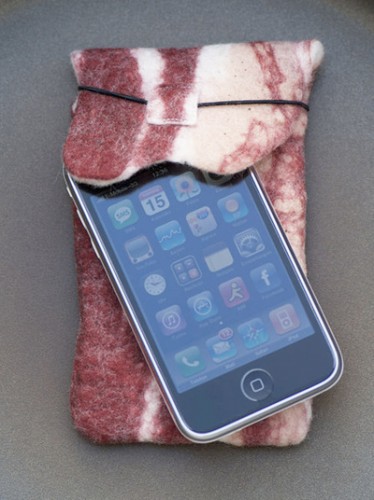 By now, we have all become desensitized to the iPhone. We tend to forget that in the grand scheme of life it is probably one of the most amazing devices ever created. Of course, we want its service to be better, the battery life to last longer, and we want to multitask with it…but wrapping it in bacon solves all of those problems while simultaneously solving none of them.

Wrapping something in bacon is the greatest placebo of all time. 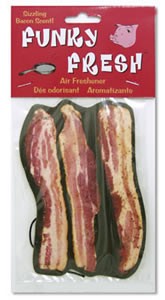 To Hell with that lame green pine tree! You want your car to smell good enough for the ladies? Slap some strips of bacon on to your rear view mirror and your lonely nights will be over…or will continue for quite a while longer. Bacon isn’t really the aphrodisiac we’d all like it to be. 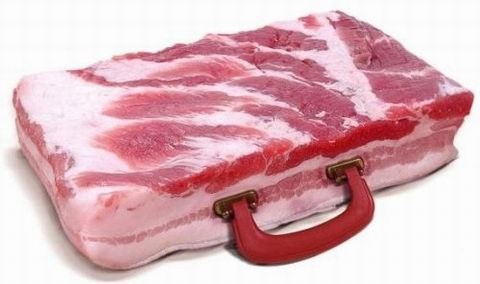 Finally, something you can use to carry your important bacon documents around in.

Now, this …thing probably isn’t real, which is both good and bad. It’s good because if it were real (and were it made of real bacon) it would probably the biggest health hazard your office has ever seen. The bad part about it being fake is that if it were real it would be the perfect deterrent for roving gangs of Muslim street toughs looking for a rumble. 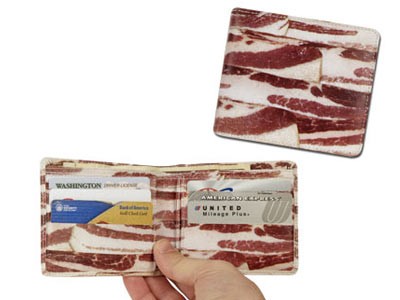 What do you get the young and powerful business man on the go that already has a bacon briefcase? An object that makes it look like he is storing salty meats in his pants like homeless guy near a butcher shop dumpster. There’s nothing more attractive to a lady than pulling your American Express black card out of a hunk of meat. The only thing that could possibly make this better would be to toss out the bacon wallet and just carry your keys, money, cell phone, and credit cards within a large wadded bacon entanglement. Every time you pull out some cash make people think you are unleashing the Bacon Cthulhu from your butt. 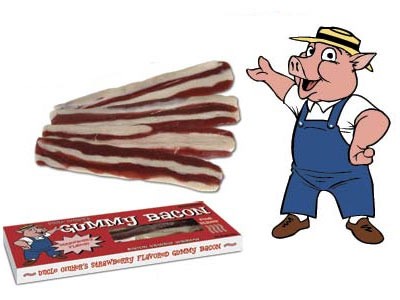 This stuff…this stuff is a damn mystery. It comes packed like bacon. It even looks like bacon. But, it has the texture, consistency, and elasticity of a gummy bear. To throw off your experienced bacon-eating palate even more, it’s strawberry flavored. Obviously, not all of these creations are good. Sorry, but there just seems to be a fundamental lack of understanding of what elicits our love and passion toward bacon. The only reason we love bacon’s look is because of the great bacony taste. If you subtract the bacon flavor and only give us the bacon aesthetic, then the entire foundation upon which bacon is built upon crumbles brining the entire experience along with it. 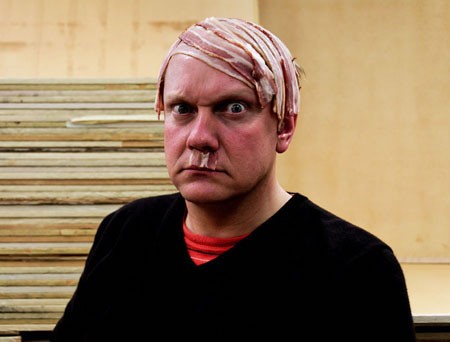 This may be a bit of a controversial stance, but we’ll wager to guess that if the real Hitler actually looked like this we’d all currently be under his enslavement.  The power one is granted when they secrete bacon naturally from the body’s thousands of hair follicles is of such magnitude that no weapon on this plane of existence can do it harm. That, or we would have got to him much faster as to roast his head as a part of a post WW2 “Death to BaconFace” luau. 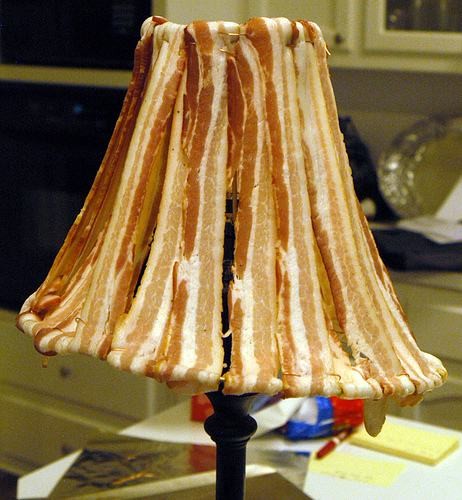 Humans are an inventive lot of animals. We have this distinct ability to look at something, and figure out the precise alteration it needs to be a better, more efficient, and more effective thing. A lamp shade made of bacon, of course, is what instantly comes to mind when discussing human ingenuity. For those that may be wondering just what the purpose of a lampshade made of bacon is, we will respond to you the way Aaron Burr responded to Alexander Hamilton’s journalistic defamation of Burr's character during the 1804 New York gubernatorial race: Shut your big stupid face. 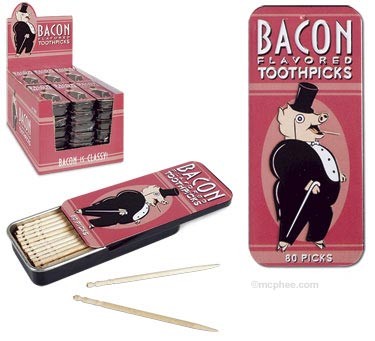 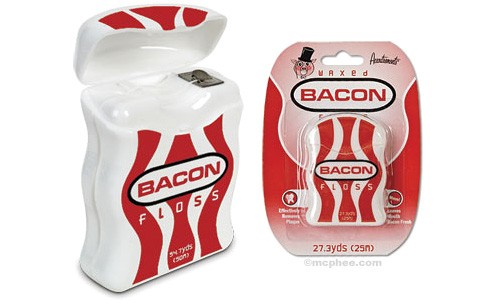 Did you just eat some bacon? Do you have bacon wedged between your teeth? Need help getting that bacon out? Why not use some bacon? What? Bacon won’t aid in the excavation of bacon? Then, how about bacon flavored tools? If they can make floss and toothpicks taste minty, why can’t they also make them taste like bacon?

This is a reasonable line of questioning that that went horribly wrong somewhere. 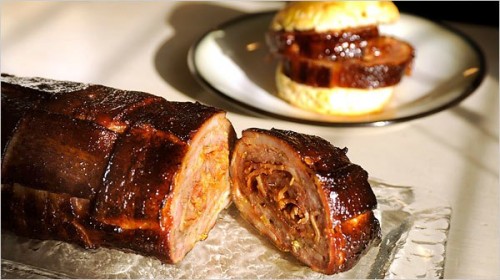 A two pound woven cloth of bacon that holds within it 2 pounds of Italian sausage, and crumbled fried bacon…which is then barbequed and slathered in BBQ sauce. If the Bacon Man was built to honor the Bacon God, then the Bacon Explosion is what us lowly humans must eat to celebrate the birth of the Bacon God. He was born on 87 separate days of the year.
www.bbqaddicts.com www.nytimes.com